One might think that Galleries Lafayette is just another Myers or David Jones but the building and in particular the dome make it a most special place.

From the ground floor there is a five story high atrium that consists of 'galleries' around the perimeter of the atrium before it turns into the most exquisite dome. Looking up when the sun is shining outside makes it a very special place. The store is full of high value merchandise, and I mean high value. For example de Beers have a section where it's possible to buy beautiful diamond jewellery at exorbitant prices. Silk scarves were around the €300 mark. We have drawers full of scarves in Melbourne so I must check to see if any of them are silk so that maybe we can recover some value.

In the afternoon we joined a tour of Notre Dame. An American woman who had been living in Paris for seventeen years was a volunteer for CASA. I wish I could remember what CASA stands for so that I could link to their website, however I cannot and I can't even find them on the web. In general it is an organization that fosters volunteers who provide information about major buildings in France. Anyway about twelve of us, amongst a few thousand, assembled under the organ at the west end of Notre Dame and set off for our tour. 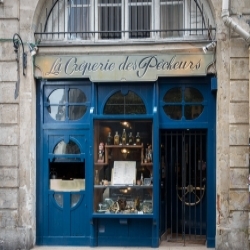 I think it takes place every day at 2.30 p.m. for the English tour but if you are comfortable to join a French speaking tour they go more frequently. We started by looking at the exterior of the cathedral and in particular the two towers and the west end doors.

There was so much to see and understand that we could have taken far more than the two hours that we had available. Our guide was able to take us into areas of the interior that were unavailable to those who were there under their own steam and we got into the main alter where there were some exquisite artefacts.

​We came across a small 'crèperie' just behind the Quai des Grands Augustins in Rue Saint-Andre des Arts called La Crèperie des Pêcheurs. It was small but well worth dropping by for a light lunch. They served a crèpe with Coquilles St Jacques which was my favourite.