A flight over Lake Eyre

A good friend suggested that we take a trip to central Australia to see Lake Eyre in flood. We booked an Outback Spirit tour which started in Adelaide and took us to William Creek where we stayed for a couple of days in the William Creek Hotel. From there we flew to Kalamurina Wildlife Sanctuary, Birdsville and back to Marree, before driving back to Adelaide via the Flinders Ranges. Our tour guides, Brendan and Peter were excellent tour leaders: not only were they knowledgeable about all aspects of the places we visited but they knew the people in the outback because they, and in Peter's case his ancesters, had lived there.

The coach was confortable and between the driver's area and the body of the coach there were books about the places that we were to visit as well as fruit and sweets for the journey. There was a camera on the windscreen pointing to the way ahead which was displayed on a TV screen for all to see and when travelling along the Oodnadatta Track the view was nothing but dust and corrugations. However at least we knew where we were heading in the right direction. 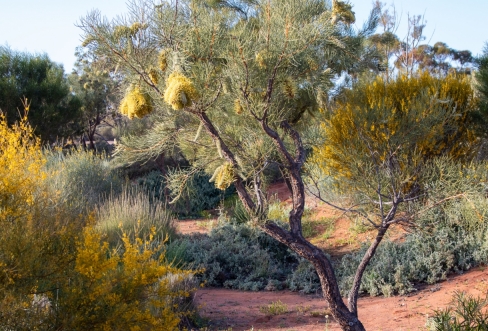 For me the highlights of the trip were the visits to the Australian Arid Lands Botanic Gardens and Kalamurina. The Arid Lands Garden was an absolute delight and filled with the most beautiful native plants. It was created on a 250 hectare coastal site just outside of Port Augusta. During the 1980s the development of the site was funded by Council and a Friends group with on-ground work assistance from Government unemployment relief schemes. As the garden has grown it has become home to many species of birds and the first survey in 1987 recorded 137 species which grew to over 150 at the last count. In addition the garden is home to a variety of animals such as goannas, snakes and various mammals.

Kalamurina is a vast desert wilderness, covering a remarkable 679,000 hectares at the intersection of three of Australia's central deserts: the Munga-Thirri-Simpson Desert, the Tirari Desert and Sturt's Stony Desert. Over sixty-five percent of the water that enters Kati Thanda-Lake Eyre travels through Kalamurina.

The Warburton Creek is the major source of water for the lake, with its origins in the Channel Country of Queensland. The water takes around one month to travel one thousand kilometres before meandering through Kalamurina in the Warburton Creek. It converges with the Macumba River and Kallakoopah Creek before flowing into Kati Thanda-Lake Eyre, the largest lake in Australia.

Whilst staying at The William Creek Hotel we took the sixty four kilometre trip to Halligan's Bay on the Southern part of Lake Eyre. William Creek and Halligan's Bay are within the confines of Anna Creek Station which is the largest cattle station in the world and now owned by the William's Cattle Company. There were few if any cattle on the property because the drought had significantly reduced the feed on the property to the point where it is impossible to run any stock. To prepare for the next rain event, contractors were renovating all of the 170 dams on the station. Across the station there were a number of bore holes which allowed water to flow from the artesian basin and these bore holes supported small areas or vegetation.