During the Melbourne winter it is a good time to head north to the warmth of Broome in the Kimberley. This year we joined our friends Heather and Geoff George for a week of luxury at the Cable Beach Club Resort just a few steps from the famous Cable Beach. Our room was on the ground floor adjacent to the 'adult only' pool and not far from the Sunset Bar & Grill. Most of the time we relaxed by the pool with the occasional swim, tapas and coffee. Every morning we had breakfast overlooking the beach with the sun sparkling on the water and at night time we headed off to the Sunset Bar to watch the camels and the sunset whilst having one, or maybe two, cocktails before dinner. There were plenty of places to have dinner without having to go into Broome and the highlight was a Japanese meal to celebrate Heather's birthday in Zensai. 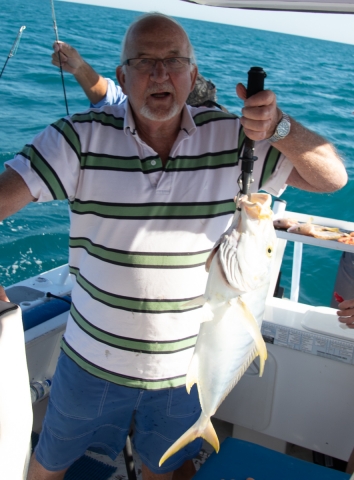 Geoff and I took an all day fishing trip with West Kimberley Fishing Tours. We had a lesson in linguistics and politics. Every second word started with 'f' and we were informed about the benefits of the liberal party's tax policies in terms that seemed rather simplistic. Eventually we got to the boat and helped get it off the trailer and into the water and set off for the fishing grounds a few kilometers off Cable Beach. On the way we trailed some lures to see if we could snag a few spanish mackeral but we had no luck. We dropped anchor, baited up and the action started. Geoff hooked a giant trevally and had trouble landing it in the boat. When we finally got it on board it consisted of a head, backbone and tail and was missing all of it's stomach. A shark had taken a bite while the fish was being hauled in. Not long after I hooked onto a four to five foot spinner shark and had no chance of landing it whether we wanted to or not. It took the line and leapt three to four feet out of the water three times before the line finally broke and off it went. The rest of the day was spent catching a motley variety of fish with enough to take home to the Sunset Bar & Grill, where they were fileted and served with salad and chips. They were delicious.

The following day we decided to take an afternoon cruise on a 40' catamaran around Roebuck Bay. It was the most fabulous afternoon. Bart Pigram, a local indigenous man from Broome, gave us a talk about Roebuck Bay's history and people before capping off the day with some fabulous songs as the sun set in the west. Although we only had three hours on the catamaran it was probably the best three hours of the entire week that we were in Broome.

Jenny and I left Broome for a couple of days in Darwin before heading back to the cold weather in Melbourne. We stayed in the Mantra on the Esplanade and what a disappoinment it was. Room service was non existent and they seemed to suggest that we had a package that excluded room service. I complained and they offered us a free breakfast but I would not stay there again. The bed wasn't made, the floor wasn't vacuumed, the towels weren't replenished, the fridge wasn't refreshed with milk and the tea bags weren't topped up.

We did, however, have a view of the sea! In Darwin we visited the Mindil Market once again and also had a wonderful meal at the Darwin Sailing Club's Waterfront Bistro. The Coffin Bay oysters were exquisite, the fish was fresh and it was all washed down with a glass of cool white wine.